I'm a huge fan of Blizzard and Collectible Card Games. Hearthstone is Blizzard's successful exploration of this genre. I've been working on my own card game over the past year. While I have some time between contracts I decided to try my own hand at designing a card for Hearthstone. This article will outline my process, card designs, and final presentation!

I have played Hearthstone for two years now so I already have a pretty good understanding of the game's evolving meta, and functionality of each of the classes. I watched dozens of videos from Ben Brode, ex-staff, Youtubers, and critics to build an understanding of the ecosystem my card would need to be dropped into. One of the more inspiring videos came from a dialogue between Ben Brode, the lead designer of Hearthstone, and Kripparian, a Youtuber and vocal critic of Hearthstone's controversial cards.

I've linked to the part of the video that specifically inspired my design approach for my card(s)! I wanted to design a card that seemed great at first glance but was actually a mediocre to poor card in reality. Most new players of Hearthstone have never played a CCG before. My card's main focus needed to empower new players to learn more about abstract mechanics unique to CCGs and help them transition from beginners to intermediate players. Multiplayer games by their very nature require a large body of intermediate players. Without these players the game would lack content!

No amount of new cards, mechanics, or ideas would save the game if there simply aren't enough people playing. Realistically Hearthstone isn't at risk of losing it's substantial playerbase anytime soon, but the community needs to continue to grow to remain healthy.

I also joined several online communities and observed what the Hearthstone community was asking for and creating. There are some great cards out there on /r/customhearthstone and on Hearthcards.

In college I spent one of my major projects designing and implementing a balanced new faction in Warcraft 3. For that I compiled every stat relevant to gameplay from every building and creature available to each faction and designed a giant formula to calculate the average gold to power curve across all races. I also factored auras, spells, and perks to achieve find numeric balance.

I originally began a similar process to compile and analyze all of the Hearthstone cards. A day or two into this, I realized that other than finding a power curve and some basic class archetypes I would be spending too much time crunching numbers when I should launch into card designs as quickly as possible. By this stage however I had mapped out the core components of each race.

My new card needed to break the mold, but not necessarily create a new outlandish archetype. It might come off ill researched if I proposed a Shaman Beast synergy card! After I had mapped out the core components I researched online to see that Rogue, Shaman and Druid were deemed the most difficult classes for beginners to play well. Warlock and Shaman were nearly tied, but Warlock cards neatly neatly the trade-off of discarding cards, and using health as a resource.

Rogue is challenging due to the Combo effect unique to their cards. Combo requires them to plan ahead and play multiple cards in specific orders to get the best effects. Their hero power provides them with a 1/2 weapon. Naturally, playing a class that is catered to Control requires a greater understanding of board control and identifying good trades.

Shaman is difficult as the Overload mechanic requires players to plan ahead for the next turn. In addition to this the board positioning of several minions is important to utilize their full effect. (See Flametongue & Tuskarr Totemic.) Finally the reliance on RNG heavy elements makes Shaman intrinsically reactive to their own abilities.

Druid requires an understanding of the mana curve, board control, and must use the inherent Choose One abilities to react to the evolving board state. It can be difficult to use these effects to their strengths without having a good understanding of the game's evolving meta and the tools available to each class.

- A 3/3 is fair for this card as the average stats for Rogue accessible pirates is a 3 Mana 3/3 ignoring card effects. 9 Mana for average 12/12 is fair. These stats factor in Pirate Legendaries seldom seen with new players. - This card focuses on teaching Hearthstone unique quirks. An example of this is that this card would not trigger the Pirate's Battlecry effects. It also reinforces new players' understanding of Tribes (Murloc, Pirate, etc.) and board control. - The big drawback for this card is that 3/11 Rogue accessible Pirates have Battlecry effects, and 3/11 Pirates have weapon synergies. The high Mana cost for this prevents the player from equipping a dagger the same round the Pirates are summoned. - Senior players could estimate odds to put better pirates into play, or synergize with Gang Up. Alternatively, a coin could be used at Turn 10 to give the Rogue the ability to use their Hero Power to utilize Pirate Weapon perks.

- This minion is an under-curve body to gamble for long term curve bonus. The big stats may attract new players, but realistically this card would be too slow to

play in most match ups.

- Pirate Captain should help teach players about the importance of Tempo and the risk of relying on Top Deck draws.

- The mechanic of giving +5/+5 to the next Pirate drawn had the rare effect of possibly buffing an opponents minion if they draw a Pirate first.

This card was ultimately left on the cutting floor as the mechanic was odd. As a card targeted towards new players, it didn't make sense to introduce a unique mechanic that applies a bonus to a card when drawn. A neat idea, but ultimately it was just outlandish enough to drop for now.

- A solid early game card that gives Shamans the incentive to use the Hero Power even if the effect is not immediately useful.

- Teaches new players versing Shaman about the importance of kicking down Totems even if they aren't an immediate threat.- Totem Guardian adds another Early game tool to the Totem Shaman meta.

- Very powerful early-game board builder when synergized with Flametongue Totem by Turn 2. Turns into a 3/3 with Taunt, which is a difficult platform to knock down for the opponent.

- This minion has late game utility when there is enough mana to afford pinging the hero power every turn.

This card made it to the final round of elimination. I ultimately cut this as Tunnel Trogg was already a solid early-game Shaman play. Once that minion has cycled out of Standard, this card would have the opportunity to sit in the limelight. In addition to this, this card was favored in feedback discussions. Hearthstone is a controversial game in many ways, so I wanted my final card design to have that divisive spirit.

The Overload power is one that Blizzard has been exploring a lot in the current Meta. Blackrock Mountain gave us Lava Shock and Tunnel Trogg, while Whispers of the Old Gods gave us more Overload versatility.

- Combos well with Earth Elemental + Elemental Destruction + Windfury on following turn. I personally don't believe Combos should be avoided as they're often difficult to pull off, and require skill and timing to execute.

- This gives new players another tool to monopolize on Overloaded Mana Crystals. New Shaman need to learn to use foresight with Overload and use Shaman cards to synergize with the effect well.

- Downside is the player needs 2-3 Overloaded Mana crystals for this to become worth it.

- Poor creature buff compared to other class equivalents.The strength of this card simply negates some of the drawback of Overload.

- Above average Baseline stats allow this card to perform well despite the drawback of losing control of Choose One flexibility.

- Fandral Staghelm overrides this card. Meaning this is more viable for players with more cards.

- Plays into Hearthstone's Ogre design, where ogres have effects that give their attacks or effects 50% chance to perform the desired action.

The negative was too easy to negate. I could have reduced this minion to a 3-Mana 4/3, but even then I doubt it would have been as appealing to new players. It may be more alluring to senior players attempting to build an Aggro Druid deck as most other 3-Mana 4/3 cards have situational benefits. This is cool but it deviated too far from my original intent of designing a card for new players.

- High stats and Shade of Naxxramas effect are traded for the loss of Mana gain. Druid can still collect Mana Crystals via other cards, but at a much less consistent pace.

- Creates interesting counter-play strategies for the opponent. Freezes, Taunts, and Paladin Debuffs force the Druid to fall behind Tempo.

- Teaches new players the importance of Tempo and doing what druids to best, racing for Mana Curve!

- Decent to draw near 10 Mana Crystal cap, but would not thrive in topdeck wars.I ultimately chose

Corrupted Ancient as my final pick as it was divisive and it looked intimidating, but I believe it would be pretty terrible in most match-ups. It forces reaction and response in the same way that Flamewreathed Faceless is, but it's prolonged existence can utterly cripple the player in control of it. I have written up a formal design document where I analyze the card in greater detail! 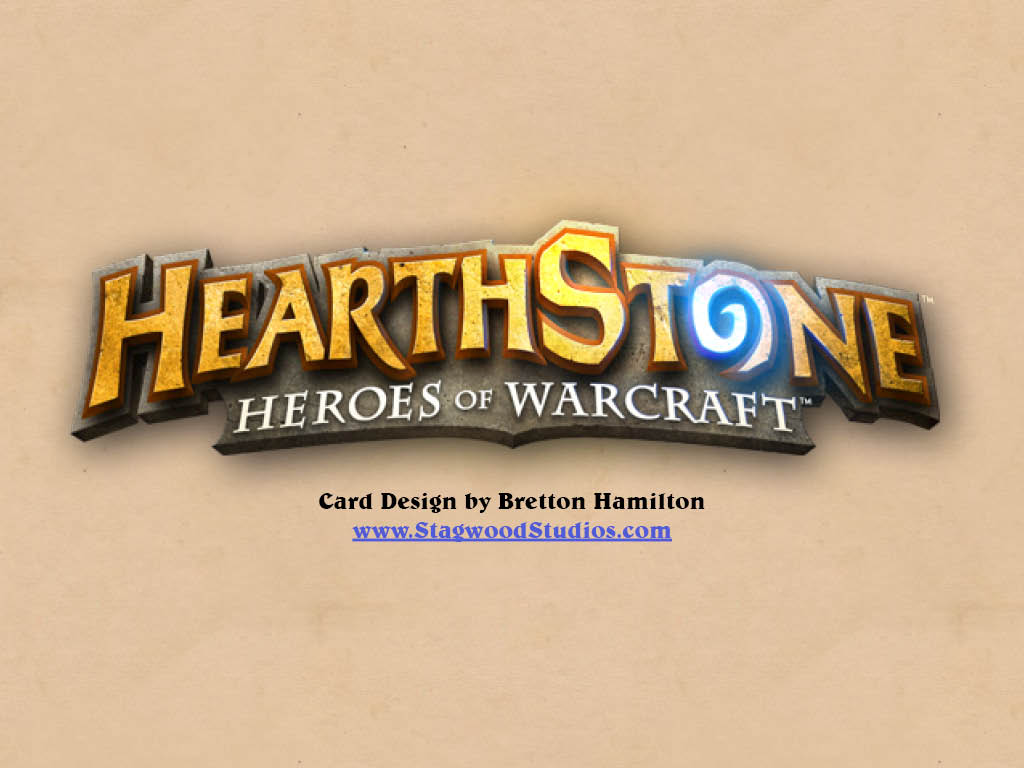 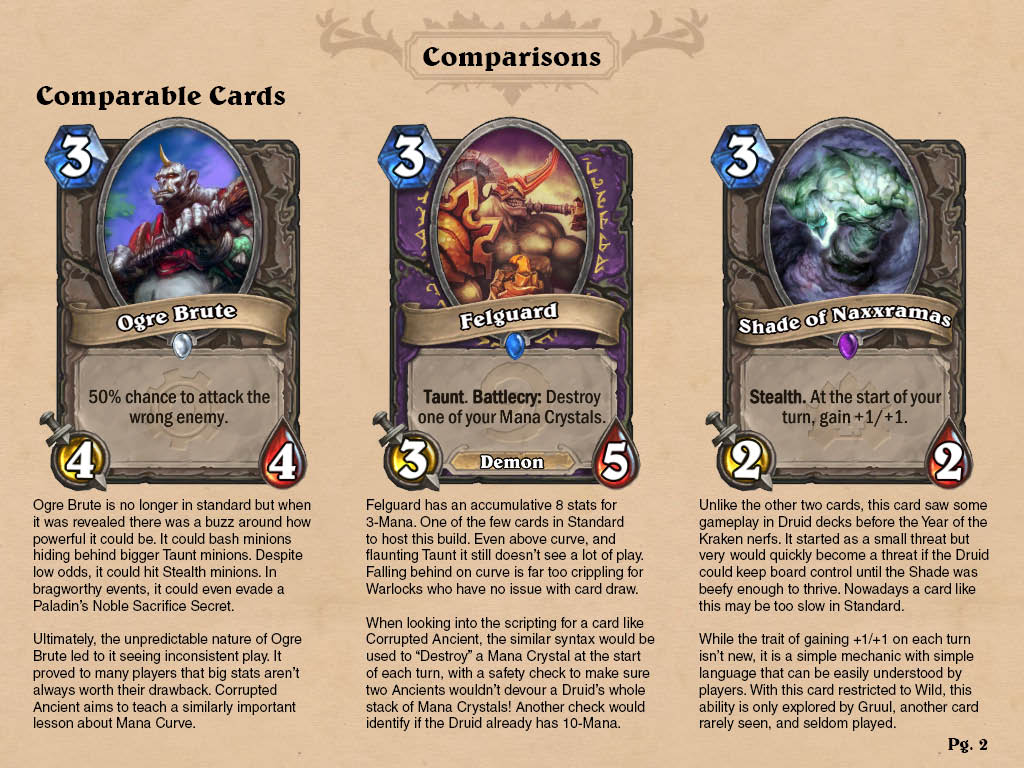 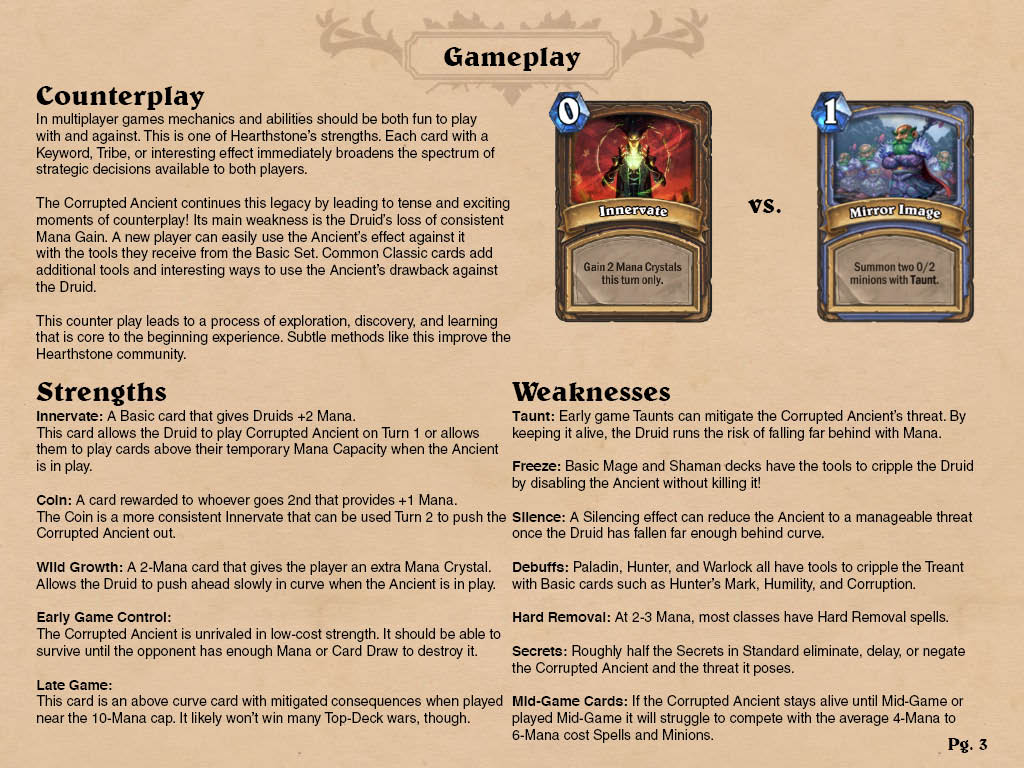 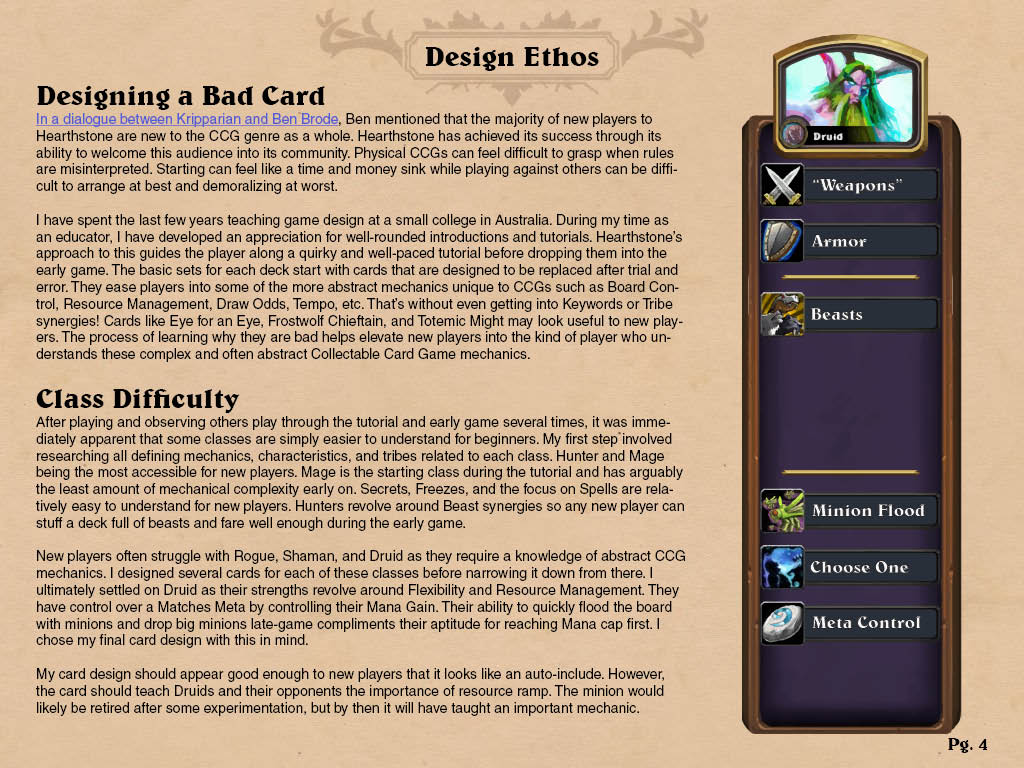 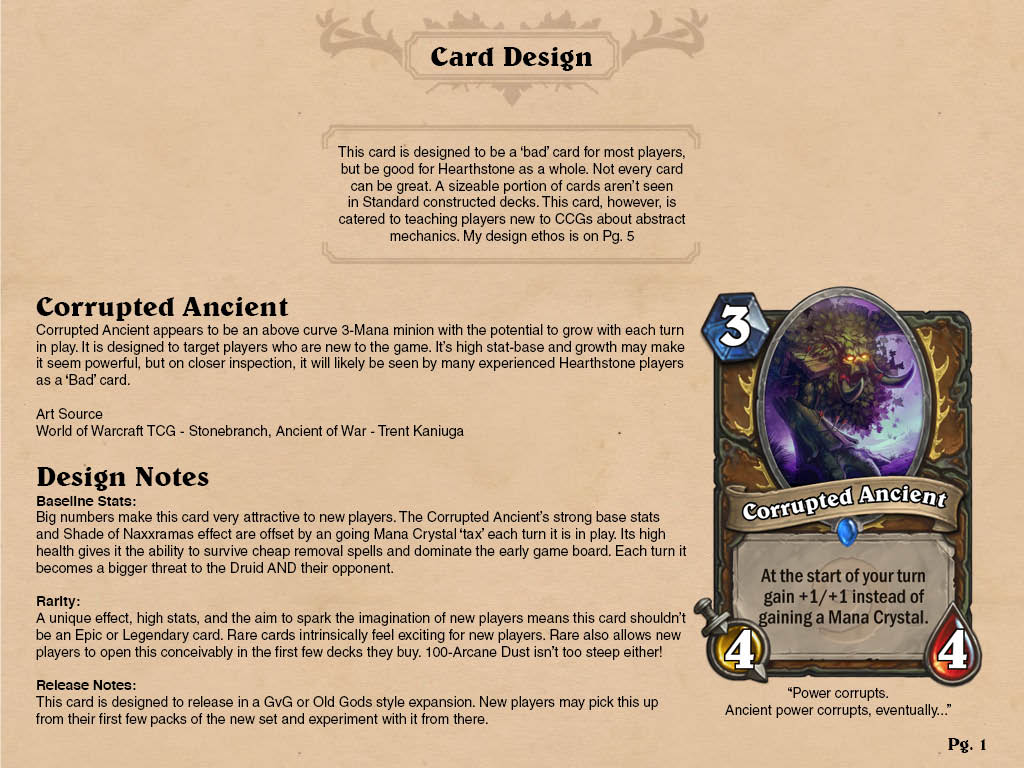 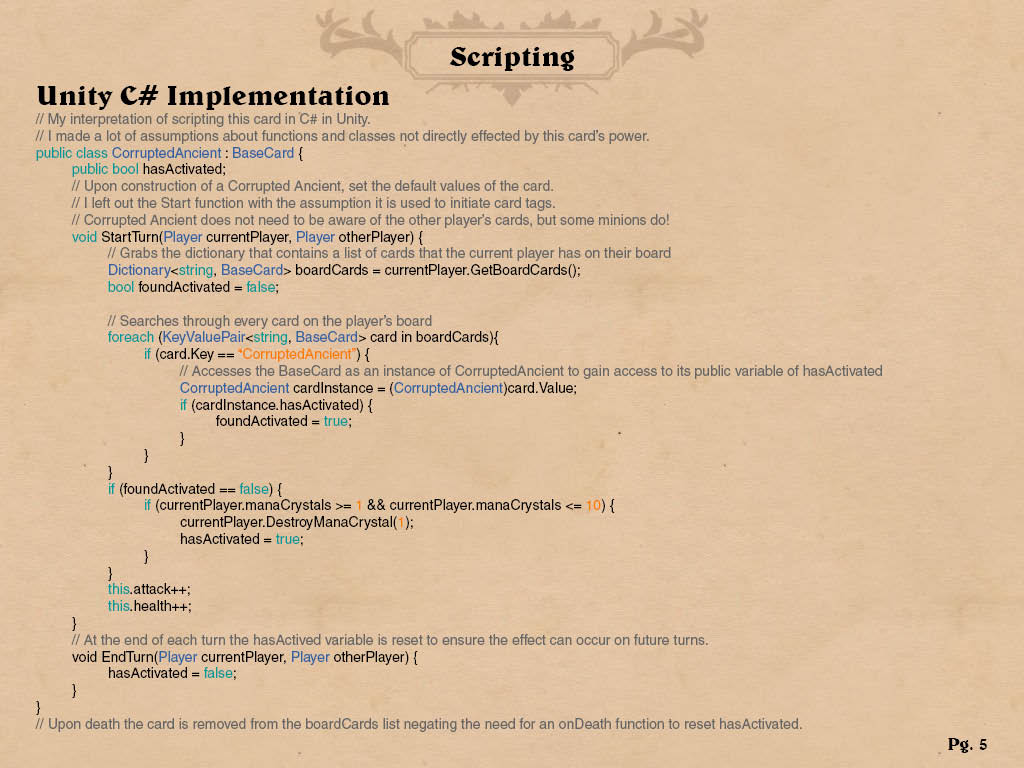 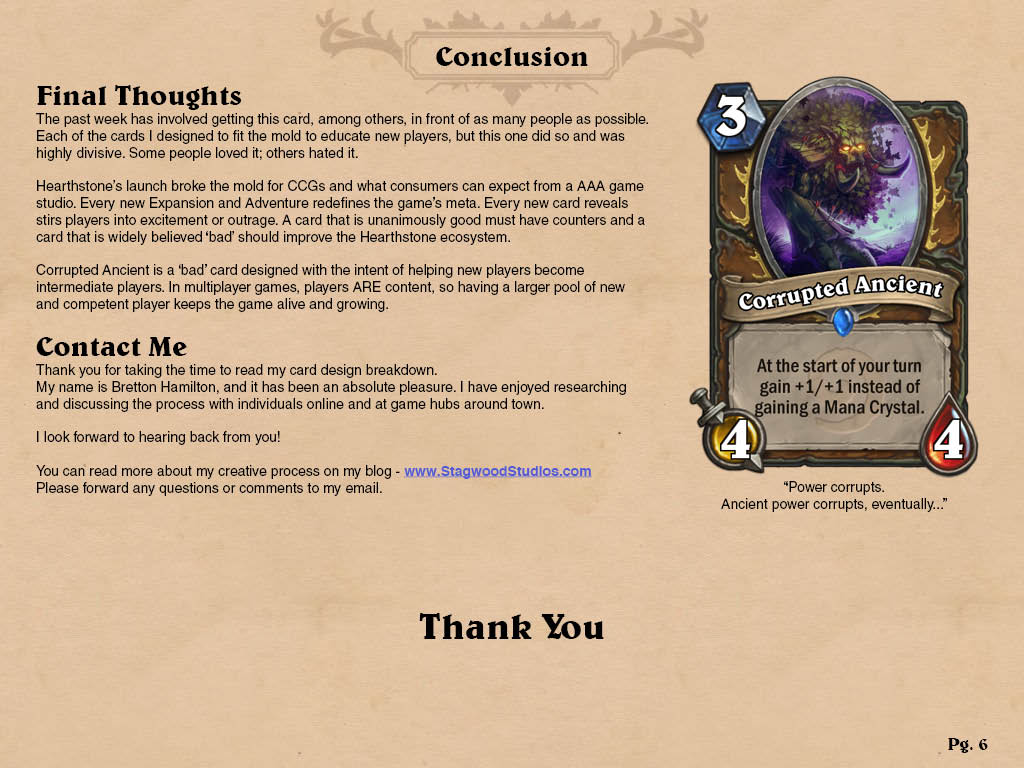